Black faces on company, corporate boards for what sake and at what expense?

Yours Truly Ideologically cannot but just welcome the information in the Simonis Storm Securities revealing that the Nictus Holdings Limited is the only listed Namibian company without any previously disadvantaged person on its board of directors for what it is, just information.

Because Yours Truly Ideologically has no illusion what Nictus is, has been and would for a long time be. A bastion of Afrikaner empowerment and capitalism. Thus in the final analysis this information is just academic. Academic and of interest if at all to policymakers and politicians only to gather dusts like many others in government offices’ shelves. Because other than this it is hard to appreciate, let alone imagine of what ultimate use it may and to whom such information may be?

It is perplexing that 31 years plus after independence there’s and can be talk of cosmetics changes such as having black and/or African or and/or indigenous faces on boards of corporations and campanies. The heck for the sake of what? This question is even simply frivolous as opposed to the principal and principled question of fundamentally transforming the economy. The pre-requisite thereof, which in the first place is the transformation of private corporations such as Nictus and others. Starting with more than tampering with the ethological mix of governing teams.

Perhaps only in this regard would such information as provided by Simonis be more than just academic.
But before one can think of the private sector falling in line in terms of the fundamental structural transformation of the socio-economic edifice, needless to say, the public sector must lead the way in terms of nationalisation. Because expecting the private sector to fall in line, if not lead the way in terms of the fundamental transformation of the economy, one cannot be talking about anything else other than the nationalisation of the national resources for the benefit of the greater public good as opposed to that of a few as it pertains currently in the current socio-economic productive system.

To avoid cosmetics such as the previously disadvantaged on the boards of these entities, which at the end of the day is just a superficial intrinsic deceitful and self-serving exercise for the status quo. Thus, if any such information is to be of any meaningful essence, the government of the day must in all earnest be leading the way, starting with clearly defined fundamentally transformational socio-economic policies. Followed by concrete nationalisation strategies and implementation.

The bottom line is that for the past 31 years plus, there are areas of the economy in which both the political and economic agents of real change must have started to, if only, make their intentions clear that they are for a fundamental transformation. Starting of course, among others, with how the natural resources in this country, at least the once over which the indigenous political and economic elite, and the comprador capitalist, seemingly have control over. One such area, needless to say, is the allocation of fishing rights holders.

Yes, the indigenes may since independence been benefitting from such rights. But how widespread and equitable has such rights allocations been, except for a few. Absence of egalitarianism in this sector is not secret by the admission of the former Minister of Fisheries and Marine Resources, Dr Albert Kawana, now the Minister of Home Affairs, Immigration, Safety and Security.

Skewed and continuing to be skewed in favour of a selected, anointed and privileged class. With some regions of the country leading the pack in this regard in terms of dominating the lists of rights holders while others, notably Kavango East and West being at the bottom of the league in this regard.

The same goes for land redistribution where land is wholesaled to a few, including foreigners. This is despite the fact that land has been stolen from the indigenes, the little land that is left, being among few and rare natural assets that the government has control over, ironically, there has been little if no consciousness at all on the part of the government to preserve the land that it has, and even to reclaim that which was stolen and continues to be stolen by foreigners.

Ironically only for the Simonis report to pretend some consciousness about the non-state of being in private companies such as Nictus, which presumably does not have any black faces on its board. For what sake, Yours Truly Ideologically, cannot but ponder. To decorate this company, and many others, which have black faces on their boards but their instrumentality thereof, which is and has been no more than to simply placate such companies, while in essence they remain what they are, white-owned exploitative and extractive bastions of capitalism.

Yours Truly ideologically is yet to be convinced that any of these private companies with a sprinkling of black faces on their boards, that they are more than mere silent and timid black faces subdued in their perceived governance of these companies. Which to most of the exploited masses and their communities, are no more than extractors of the natural resources for the eventual repatriation of profits to their homelands. While our distinguished honourable black board members are in reality just presiding over the plunder of the resources of their country. Meantime and in the process giving them and capitalism a necessary legitimacy to continue their exploitation and prolonging their lifeline while the masses of the indigenous populations continue to suffer from exploitation and attendant poverty from the sharp end of their operations-cum-investments.

How do you stuff evil back into its hole? 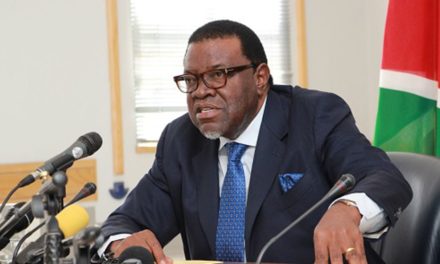 President Geingob’s Philosophy is paying off

The Time Traveler: Much Ado About Nothing