Moving the needle on Infrastructure Development … ‘An Allocator’s perspective’

Much discourse has taken place on the catalytic role of infrastructure development in spurring economic growth and attracting investment. Similarly, policy makers have responded in the form of NDP 5; HPP2; SDG; Climate resilience forums; PPP 1legislation and the Namibia Financial Sector Strategy, which through regulatory provisions, enforced contractual savings to increase domestic asset allocation. Furthermore, institutions have been set up to support the cause, in particular the Private Public Partnership unit at Ministry of Finance (MoF) and the Namibia Investment Promotion and Development Board (NIPDB).

In addition, through HPP2 government offices, ministries, and agencies (OMAs) have a governance framework within which to drive efficiency and accountability. With so much effort why has the needle not moved?

Arguably the above efforts occurred at varying timelines, some as recent as 2021, I therefore trust that with time NIPDB and HPP2 will drive much needed central co-ordination. Counterintuitively, the National budget has not responded to the need in a strategic manner. Provision should have been made in areas where Government can unlock substantial private sector participation. Sufficient allocation to project preparation would jumpstart the backlog of infrastructure projects that need preparation towards bankability.

Case in point is, realizing the capital from pension funds and long-term insurers. In the case of Government Institutions Pension Fund of Namibia (GIPF), N$3.7 Billion is committed to Infrastructure, where PPP transactions are the emphasis. However, only 14 percent of these funds are invested. Main reasons cited for poor deployment is a lack of bankable infrastructure projects; bureaucracy resulting in delayed action particularly at entities tasked with procurement; incapacity at entities tasked with public private partnerships and onerous supervision of the non-bank financial sector that is more prescriptive than risk based.

This latter point concerns the definition of infrastructure which is important for appropriate classification under regulation 13 of the Pension Funds Act. In South Africa, these regulatory limits are under review to unlock significant capital from the non-bank sector but to also allow for better data collection and measurement. In Namibia, the definition of property creeps in when allocating to infrastructure under unlisted investments, raising eyebrows that further add to the frustrations experienced.

The greatest impediment lies with bankable projects, which would be solved by establishing a project preparation fund. The Medium-Term Expenditure Framework (MTEF) 2021-25 shows that Government has availed a total of N$15 million for the establishment of the Project Preparation Fund in 2021/22 and provision of N$96 million over the MTEF to support capital and PPP projects off-take.

This is a good start, but it will miss the mark as over N$5 Billion private capital is waiting to be deployed, while Government has only earmarked 2 projects reaching financial close per year. Discussions amongst GIPF, Development Bank of Namibia (DBN), Development Bank of Southern Africa (DBSA), PPP unit and other transaction advisory firms estimated at least N$50 million government injection to be matched by other players to commence with a N$100 million facility that would screen at least 10 projects with a 40 percent success rate. N$15 million therefore, misses the mark. Another means to gain traction would be to consider regional fund.

In addition to a well-funded project preparation fund, a platform approach to infrastructure finance will allow for a greater pool of capital towards sizeable transactions. The same effort of work required for a N$500 million transaction is what is also required for a N$2 billion project.

Furthermore, offshore institutional investors feel the same effort in time is required for screening a N$1 billion fund as is for a N$5 billion fund,this coupled with their sizeable Assets under Management, compels them to rather spend effort on platforms with economies of scale offering reduced costs and better diversification. It is therefore important that there be a wide array of investment avenues into infrastructure finance as depicted in table 1 below. 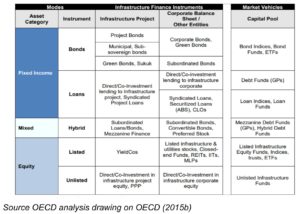 This will allow for a blended finance approach where investors may be varied according to their risk/return and commercial/social return appetites. Those seeking greater social impact than commercial return would take up the first stop losses to make projects more commercially viable. In this regard NPC and MoF must be commended for their efforts in producing Namibia’s first ever development finance assessment report of 2019 launched during March 2021.

As articulated by the DG, Mr Kandjoze “it provides an opportunity for closer and coordinated collaboration involving a broad constituency of actors from across Government, the private sector and financial institutions, development partners and other non-state stakeholders to pull resources together and prioritise funding by taking into account comparative advantage for each particular finance flow. ‘’ 2 Government must therefore pool all its sources of development finance towards this strategic plan. This is critical as currently there is an over reliance on the non-banking financial sector, which sector is not enjoying returns commensurate with the risk of availing capital at much longer duration than banks. Most importantly the capital from this sector is only complimentary, the country must work towards attracting foreign capital making full use of all financial instruments and tools available within capital markets.

Some other notable impediments are Local authorities not delivering services; qualified audits; under appropriation and underspending and corruption. Addressing qualified audits and strengthening financial controls at local authorities and SOEs will allow for municipal and SOE bonds towards infrastructure development, further deepening the avenues of deploying capital.

The HPP2 deliverables on the Effective Governance pillar, specifically the goals pertaining to accountability and transparency, as well as improved performance and service delivery should help address these short comings.

GIPF through its developmental investment policy has committed 5 percent of its Aum (N$132 Billion) towards developmental investments of which infrastructure is the lions share. Management fees are being paid to funds, whilst funds are struggling to deploy this capital for the reasons cited above. If these short comings are not addressed, other pension funds and long-term insurers will not follow suit, dampening the efforts of sourcing contractual savings towards an asset class that very well matches the liability profile of these institutions in both duration and inflation hedging and reducing portfolio volatility, amongst other. It is time to move the needle.

* Sara Mezui-Engo is Manager of Alternative Investments at the GIPF

LPM demands for public apology for arrest of Mayor

Namibia exports ‘Greenest Charcoal’ to US