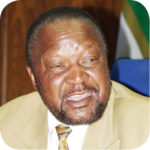 Now that we are celebrating 30 years of independence of our country it may be important to just briefly reflect on some issues of those years, particularly what still persistently and disturbingly still haunts us.

Our colonial history left Namibia economically split into three countries depending on their colour. The independence constitution was intended to build a bridge between the past divided society characterized by immeasurable misery and unequal distribution of wealth among different groups. The preamble of the constitution provides for the inherent dignity and the equal and inalienable rights of all members of the human family. It says these rights are indispensable for freedom, justice and peace. It goes on to state that these rights which have for so long been denied to the people of Namibia by colonialism, racism and apartheid, must now be effectively maintained and protected in a democratic society, where the government is responsible to freely elect representatives of the people, operating under a sovereign constitution and a free and independent judiciary.

Our constitution is perfect and is intended to correct the evils which were left behind by the defeated colonialists who ruled our country over a hundred years. Some of these evils were and are still dividing our country into “three nations”.

The main criterion used for creating this division in our country was based on the colour of the skin of the people. One of these nations is the one composed of white people who regarded themselves as a super nation. The apartheid colonial regime made sure that this white nation enjoyed fruits of the country and were prosperous. There were those whites who did not support this colour bar and who wanted people of all different colours to be treated equally. However, this decision of the apartheid regime was imperative and non-negotiable and those who dared to oppose it became victims of the regime.

The second nation which was composed of ‘coloured’ people who, under apartheid laws, were not regarded as whites and also not as blacks. They also were forced to enjoy fewer privileges than whites, but the repressive laws provided that they received more services, opportunities and better treatment than black people.

The third ‘country’ is the majority and that is the one for black people. Blacks, under the old days of apartheid were regarded as sub-human and were perceived to be only useful to work as slaves of the legally entitled and protected whites. This black nation was forced to live in extremely degrading conditions.

The constitution has opened up the opportunities for the disadvantaged ‘black nation’ to have and enjoy equal rights and equal access to opportunities. Because of the long and protracted history of exploitation, most blacks are still living under conditions of underdevelopment and too many of them, economic prosperity is still theoretical rather than practical. For them to live in informal settlements is not because they want to live there, but just because they simply cannot afford to move and acquire property elsewhere.

We the people of this great country know the injustices of the past and recognize the fact that our country belongs to all of us. Therefore, we adopted a very good constitution. However, we have to ask ourselves to answer one honest question. Can we can make complete progress to uplift the feelings of hope and economic prosperity of the masses of our people and liberate them from poverty in such a relatively short period – my answer is – no. It is a fact that the grossly underdeveloped and miserable living conditions under which our people live come as a result of over hundred years of maliciously planned colonial robbery and exploitation of the wealth of our country. That unbearable situation cannot be completely changed in a very short time, ie, 30 years.
We are politically equal people but we are economically still waging the battle of liberation. But surely the victory will be ours in the end. The birth of democracy came with the hope of delivery of wealth to our people, but this will not be a miracle.
Therefore, I am afraid to say that abolition of the legacy of apartheid will take some time since it will require a considerable amount of resources and determined efforts. Apartheid’s insidious nature not only repressed the people economically and politically, but psychologically and socially. Much ground has to be regained.

The reality of “three nations” came into existence through many years of colonial rule and it may perpetuate itself for some time to come. However, we shall surely overcome and liberate our people from poverty, hunger and unbearable conditions of life.
I am not impressed by the arguments that 30 years of freedom were enough to liberate every black person from poverty since colonial and apartheid brutality was maintained over 100 years.

However, we are determined to abolish that situation. There are still many changes ahead but if we can, as a united people, fight to liberate ourselves from those changes we shall emerge victorious.

The Time Traveler: Much Ado About Nothing

Observatory: Lives are worth more than the economy

Materialist conception of history context of the National Resistance