Tests to decide employment are biased

I remain highly sceptical of psychometric testing to decide the personality of those applying for jobs. How can a panel of white mostly male psychologists and HR practitioners make a test that is in any way fair and applicable to people of another colour, culture or class? These tests are geared for white people’s ideas of what is an ‘acceptable’ professional personality trait are. Why do we continue with allowing these South African companies to pump us for money to engage in job selection practices that are discriminatory?

Psychometric testing is a short-cut effort to measure intelligence. And yet,
no one has succeeded in measuring intelligence. It cannot be properly defined and is highly subjective. The reality is that such tests are not verifiable. No one really knows whether they are somewhat valid and to what degree. Such tests are highly prejudicial, biased and can violate the Namibian constitution.

Currently, in Namibia, the NCAA is concerned about psychometric tests as a recruitment mechanism that is supposedly geared to select certain people for certain posts. It is amazing that a tender was given to yet another South African firm to provide these discriminatory, biased tests that are used to make key employment decisions.

Tests reflect the disposition, limitations and prejudices of those who make them up. Right now in the USA, they are trying to use computerized facial recognition software designed by white programmers to find bad guys who commit crimes. The software is incorrect in identifying over 60% of the black faces that it claims to ‘recognize.’ After dozens of false arrest law suits by falsely accused black men and women, officials have suspended use of this racist software. Take note: the software can recognize white people with 95% accuracy.

I recall taking one of these biased psychometric tests when applying for a post. The test offered me choices that referred to religious issues and statements made by preachers in a church. Such questions are unconstitutional in Namibia – my religious beliefs must have nothing whatsoever to do with employment or promotions decisions or criteria.

I drew a line through that section and said that series of question was illegal and prejudicial. Needless to say, I did not get that job.

Human rights legislation prohibits employers from making decisions relating to employees or prospective employees based on grounds of discrimination, such as place of origin, religious belief, family status or disability. Certain types of psychometric testing can lead to a human rights complaint if it results in an individual or group of individuals being classified or “screened out” of an employment opportunity on the basis of a prohibited ground of discrimination.

In other cases, a psychometric test used by an employer may be criticized for having the effect of excluding a group of persons on the basis of a race or ethnic background. This can be particularly problematic with tests that are intended to measure whether an individual has leadership potential or “fits” within the culture of an organization.

Years ago a close friend told me that he was passed over for a promotion at a huge corporation in California. When he complained, he was told, “the other guys (all white) wouldn’t like taking instructions from you. You don’t socialize with us at company events enough – so there isn’t a fit.” This man, who for religious reasons, does not drink, prefers not to attend alcohol-drenched company ‘social’ events at bars. So, he is viewed as being ‘anti-social’ with his white colleagues. He trained all the ‘guys’ who were promoted above him.

He sued his employers and won a non-disclosed out of court settlement for multi-millions.

People with their own cultural bias set the ‘terms’ and definitions of employee ‘fit’ and then set a criteria (attending bar parties) as a measure. This is inherently discriminatory.

These psychometric tests are much of the same in principle.

While psychometric testing can be a useful tool in making employment-related decisions, it is only one factor to consider, and should not be used as a substitute for the employer’s exercise of its own judgment. (www.lexology.com, www.inc.com)

I submit that such discriminatory testing by its design done by those of another culture than those taking the test is flawed and is arguably unconstitutional in Namibia.

The Time Traveler: Towards a freer media

A day late and a dollar short 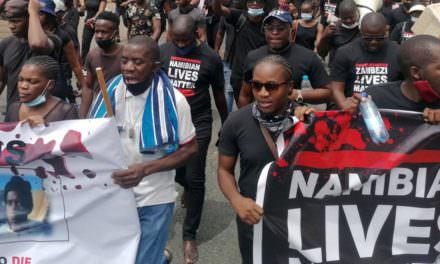 The noise of silence by our government

No to BIG Brotha’ Jauch