The protests are a cry for help, not a threat

October 31st is the deadline #ShutItAllDownNamibia protesters gave Doreen Sioka to resign from her position as Minister of Gender Equality and Welfare. As I type this, protesters of all ages are most likely prepping their cooler boxes for the farewell ‘bring and braai’ scheduled to be held outside the Ministry of Gender Equality, Poverty Eradication and Social Welfare on 30 October. The event demonstrates the youth’s commitment to knocking on the doors of the various avenues that were given the mandate to protect those vulnerable, in a society that values male comfort over women, children and non-gender conforming people’s safety.

One social worker for every 11,000 children is the statistic being circulated. This is a system that cannot serve the public. A failing system is costing us our lives. Rape cases are being mishandled, prolonged, some not even making it to the relevant governing bodies to be dealt with. Every day without fail there is the expected headline in the news detailing yet another violation of a vulnerable person’s body. The cases that make it to the papers are the ones that are deemed shocking enough to catch the public’s attention, in our rape and violence de-sensitised nation.

Three decades have passed since independence, yet vulnerable people still live in fear. The problem is that our people have become so comfortable living in the silence of victims, that the very thought of the youth taking to the streets to express their grievances is met with groans of disdain, teargas and rubber bullets. People who actively worked towards the rights of the racially prejudiced in this country, can’t seem to wrap their heads around the idea of the youth taking to the streets to voice their anger against GBV. It’s humiliating to realise that as a woman it doesn’t matter which system we are governed by, we will always fall victim to male violence. It is even more humiliating to be asked to rally against racism knowing fully well that the men in our own communities would be the first to instigate violence against us. There is no ‘peace and prosperity’ for those who were not born heterosexual men.

2020 is the year we say ‘enough’. It is the straw that broke the camel’s back. I urge those who frown upon the demonstrations taking place to think beyond the various narratives being thrown around. There will always be spaces to discuss respectability politics and ‘tradition’ when it comes to how anger is expressed. However what is currently taking place is history, and the legacy of this country is not in the hands of those who have nothing but criticism to contribute to this conversation. It is not in the wealth that shrouds the shoulders of our ‘elite’ citizens, cushioning them from the social issues we are facing.

The legacy of this country is in the hands of the youth that are taking to the streets. The youth are not hooligans disturbing the peace. They are not attention seekers. They are regular everyday people who have come together in numbers who will live on to tell the story of this country. Amongst them are our future lawmakers, artists and writers who are bearing witness to the response to this cry for help. These are the people the memory of this country is entrusted to. They will live on to tell the tale of what happened on the 10th of October 2020, about what happened to the Zoo Park 25.

These protests cannot be taken lightly; we must take this opportunity to truly listen to the cries of the youth. Do not be blinded by pride, the youth of this country can no longer afford to live by the same old rules.

We have had enough, we are tired. We desperately need change. #OnsIsMoeg.

Socialism only route to a radical socio-economic transformation

Observatory: Is there hope for 2020 graduates? 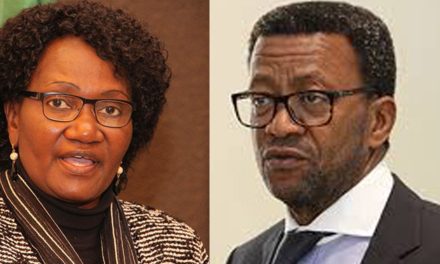 Higher Education Minister is above the fray