I sincerely hope the Minister of Justice is wrong.

The State of Emergency set up to deal with the Coronavirus pandemic was lifted last week on the night of September 17th. If Namibian social media is anything to go by, the next few days were filled with partying, drinking, non-mask wearing and lack of enforcement of social distancing and sanitising requirements.

On September 19th, Minister of Justice Yvonne Dausab tweeted: ‘I too am very concerned. People have completely thrown caution to the wind. Parties are abound. Funerals are crowded. Music is loud. Masks are in pockets. Even shops are not vigilant. It tells me one thing…we have a challenge being disciplined unless policed.’

In part government has itself to blame, for not publishing regulations under the recently-operationalised Public and Environmental Health Act sooner. You can hardly expect people to obey the rules when they’re not quite sure what the rules are. A week is a long time, when dealing with a virus like this.

Nevertheless, the fact that at least some Namibians seem unable to take reasonable precautions for their own well-being without some guy with a big stick behind them, is worrying. As is the temptation of other Namibians to introduce that big stick.

Maybe it’s a human universal to resist authority. When UK Prime Minister Boris Johnson this week announced what would, in our context, be very limited restrictions – bars and restaurants closing at 10PM for example – one cartoonist portrayed him in the House of Commons, with rows of aggressive army officers and policemen brandishing batons behind him.

The antics of entitled white Americans refusing to wear masks in supermarkets – satirised as ‘Karens’ and ‘Kevins’ – have become legendary.

I worry about the Honourable Minister’s tweet because the idea that Namibians, especially black Namibians, would not be disciplined unless policed, was central to colonialism.

It was part of the claimed justification behind the militarisation of the US Police and the over-policing of black and Hispanic neighbourhoods – the very things the Black Lives Matter movement is protesting against.

I’m sure Namibia’s Minister of Justice, whose performance in the role so far has been exceptionally good, did not mean to imply a return to these things with her tweet. But the fact is, these words have a historical context.

Sadly, the idea that ‘our people won’t behave unless forced to’ seems to be quite prevalent among Namibians of all stripes.

We see it in highly violent parenting. We see in calls for the reintroduction of Bible Studies in schools – not so that kids can marvel at the mysteries of creation, but so that kids can fear going to hell, and thus, behave.

It feels sometimes like we are our own colonisers.

Us ordinary Namibians must be careful not to be our own worst enemy, by failing to be self-disciplined enough to take reasonable health precautions, and by so doing leading the government to ‘police’ our everyday activities. Is that really want we want?

The police force is quite a modern invention in human history. They didn’t exist in the West beyond about 200 years ago. In most of sub-Saharan Africa, order was traditionally kept by networks of Chiefs and Headmen, with the town Constable a colonial import.

There are those who have argued that, in a just society, policing as we know it today would not be necessary at all.

I’m certainly not saying Namibia is anywhere close to a just society yet.

Right now, we need the Namibian Police Force to prevent rich Namibians setting up even more vigilante schemes to guard their loot. We need the police to protect women from some men who claim to love them.

But the long-term solutions to these respective problems are the redistribution of wealth and the end of the idea of male power over women in any shape or form.

The police in any democratic state should only be ‘a thin blue line’, to bolster our natural abilities to listen to reason and to the wisdom of our elders.

I am satisfied that so far, the Namibian government has been mostly proportional in its Coronavirus restrictions, and has resisted the temptation to use the virus as an excuse for the ‘securitisation’ of society and the squashing of dissent.

What I feel has been lacking, beyond press conferences and ministerial broadcasts, is a Namibian national public health messaging campaign stating simply the dangers of the virus and the specific precautions that need to be taken.

The World Health Organisation has been heard a lot, but I know from experience as a former UN Communication Officer: Namibians will always be more convinced when something is said by one of our own.

As for the Namibians at the ‘Post-Corona’ parties, I really hope that we can do better. It’s important that we don’t lose the plot, lose our self-discipline and let a second wave of the virus get established.

It’s important we protect our health without being ‘policed’ to do so.

Those who have been students of Yvonne Dausab at her previous job at the University of Namibia uniformly tell me that, ‘Ms Dausab is not often wrong’. Let’s hope this is one of those rare times in which she is.

Dr Hugh Ellis is a Namibian citizen and Lecturer in the Department of Communication at the Namibia University of Science and Technology. The views expressed here are personal views. Follow Hugh’s blog at http://ellishugh.wordpress.com 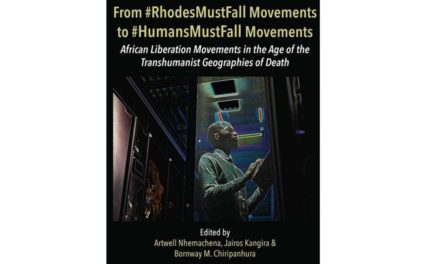 The Time Traveler: The silver lining in the corona sky

No more room for ideological errors and opportunism