Culture must be a podium not a noose

Tradition and culture must be tools to celebrate history, language and the stories of the past. Tradition must be a podium for bringing people together, not a noose or whip to force them in line.

In Namibia, there are too many infuriating cases, when tradition and culture are cherry picked and used as a sexist sledge hammer to oppress women who are marginalized within a community. When a ‘tradition’ favors someone, they are all for it; when it doesn’t, they are quiet. This weakens the entire concept of respecting tradition.

The recent story of a criminal headman of the Omufimba village in Okango constituency in Ohangewena region evicting a widow from the matrimonial home is a prime example of illegal and immoral actions done that weaken the value of tradition. This is why more voices are being raised against ‘traditional’ leaders and the Traditional Authorities Act.

The authorities must sanction that headman about attempting to ‘sell’ a woman and force her to become a man’s wife in exchange for land. Arguably, that is human sex trafficking. His actions would have reduced her to a sex slave. He punishes her with homelessness unless she becomes the ‘wife’ with another man (of HIS choosing!). This is disgraceful.

Comments by the traditional authority on this matter (if newspaper quotes are correct) are equally offensive and sexist. He says that the “widow is young and can get another man if she can…” and that the only victims are the children of the deceased man. This statement is outrageous. He needs gender awareness counselling. The widow AND her children have been victimized.

The voices calling for an end to antiquated traditional ‘rules’ that hold sway in many parts of Namibia, gain strength every time these kinds of stories come to light. Similar injustices done by so-called ‘headmen’ waving the flag of ‘culture’ are not made public. Women and their dependents suffer in silence. This must stop.

Sadly, too many younger Namibians are abandoning where they come from and going into poverty and uncertainty in shanty towns around larger cities. In addition to their economic migration from undeveloped rural areas, many young women would rather “try their luck in a destitute part of town, unemployed and vulnerable, than live in their home villages and be treated worse than the cattle.”

That exact phrase has been said to me many times by younger people from different rural areas where dictatorial headmen, senile ‘traditional leaders’ and gossipy, judgmental elder women make illegal and immoral decisions about other people’s lives. They don’t use their ‘authority’ to teach, celebrate life and history, reassure the people in hard times (like now), assist families in need, and bring joy into their communities. They would rather use a stick (figuratively speaking) and beat people down so they can feel powerful.

Remember the 14 year old girl that was raped by an older man who got off the hook by paying cattle to the girl’s father. Rape is a crime in this country and no father or rapist has the authority to buy their way out of trouble. And yet, it happened. And the people involved were just quiet.

The cases of women being disinherited by relatives of their deceased husband still occur. There are, thankfully, more cases of these greedy relatives being charged with theft and arrested. This needs to happen every time.

If women living in traditional areas rise up, lock arms together and simply say NO to such headmen, things will change. Every person in Namibia, regardless of where they live are covered under the constitution. If society jails headmen like that one in Omufimba village, within a few years, the harmful traditional practices they perpetrate will end naturally.

Women within families must talk insistently and respectfully to people in their villages and change things from within. Every old auntie, meme kulu or oma that hears from young women about the law, could move things forward. It won’t be easy, but it must start.

Authorities responsible and people of good standing in the community must talk to those headmen and call them out, privately and urgently to let them know that their misbehavior will not be tolerated. The ministry must hold training workshops with these out of date headmen. This is 2020, not 1920.

The usually passive churches must fight for the rights of their parishioners. I would bet that widow belongs to a church community. Where is the deacon or priest or pastor in challenging that errant headman as he attempted to make that woman into a sex slave?

The headman must feel negative blowback from his actions.

Tradition is a podium to teach and share and encourage, it is not a noose around the necks of women. The constitution is KING in Namibia, not a headman.

Lettin’ folks out of lock-up – is it a good thing?

The new normal must include support

No to BIG Brotha’ Jauch 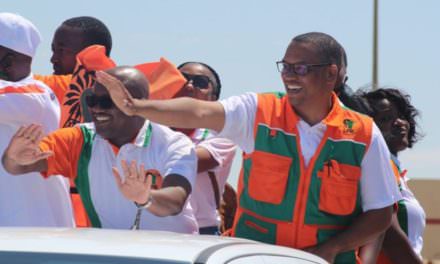 Winds of Change in //Kharas and Hardap